Of Risk and Ruin
“You’re a scientist. You look at studies, at peer reviewed journals, you look at all the evidence before you are ready to believe it. Well, time travel doesn’t work that way; it’s magic, and magic doesn’t make sense. It doesn’t have to make sense. That’s why it’s called magic.” - Nicholas 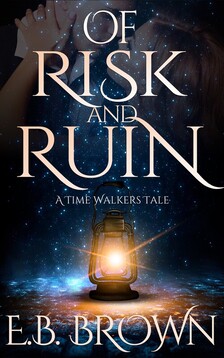 Of Risk and Ruin (A Time Walkers Tale)
​Born in seventeenth century Virginia, Nicholas is a Time Walker with a penchant for disobeying the rules. When a tragedy takes the life of a loved one, he is consumed by guilt and grief and embarks on a mission to change his own history. He believes his best chance lies in the power of an ancient Bloodstone dagger, but there is one problem—the dagger is locked up in a museum in the twenty-first century, and the obnoxiously stubborn curator, Dr. Sophia Wyndham, has no intention of letting him get his hands on it.

Sophia notices Nicholas when he pays unusual attention to a collection of ancient artifacts in the museum. Although she sees through his attempts to woo her to gain access to the dagger, she plays along with his scheme. However, she soon discovers that he is entangled in a dangerous game—and she is torn between everything she was raised to believe and her growing feelings for the incorrigible man.

When the web of deception between Sophia and Nicholas unravels, they each must make a choice to go their own way—or find the courage to take control of their own timeline in history.